I’ll get this out of the way right now. I absolutely hate this game. It is the hipster of modern shooters: a not particularly special, not especially innovative, and not incredibly intelligent game made by people who don’t like shooters for people who don’t like shooters, so they can smugly point at it and say “This is why shooters are bad. Look how clever we are.” [WARNING: MAJOR SPOILERS AHEAD]

The Willie Pete scene is the best example of this mentality. For those of you who’ve managed not to play the game (and, I mean, it’s been six years, so it’s fair that it’s been forgotten by now), the setup is this:

A massive sandstorm has completely obliterated Dubai. An American military unit, the 33rd Battalion (called “The Damned” as far as I can tell because it sounded cool) is dispatched to assist with evacuation and maintaining order. Things got worse, the 33rd were ordered to withdraw from the city, they refused, were branded traitors by the government (because, obviously, any President wanting reelection would allow soldiers on a humanitarian mission to be so treated), the UAE’s government declares the city a no-man’s land, and eventually, the smallest, most ineffective DELTA squad in existence (three guys with no desert gear beyond some scarves; they’re not even modeled with water bottles) are sent in to reestablish contact and find out what exactly is going on.

Well, it turns out what’s going on is the 33rd have declared martial law and are apparently running Dubai like a feudal dictatorship, massacring civilians seemingly at will. Our team of dauntless D-Boys get mixed up in this the most obvious way it makes sense to: by killing literally everyone they encounter.

Spec Ops makes itself out as a game about choices; one of the earliest choices, for instance, involves a confrontation with an American soldier. The game very much wants you to shoot him so it can yell at you for being a murderer, but if you try to talk your way through the situation the guy shoots at you instead and you end him anyway. So, your choice doesn’t matter.

This is a theme the game will come back to.

Eventually, we end up on a small platform overlooking a fairly large group of American soldiers entrenched between us and the objective the player character has arbitrarily set for us. Nearby is a mortar, which, once the cutscene starts, has white phosphorous rounds, the same material it’s internationally illegal to use against people. But, nonetheless, our intrepid group of soldiers decide to use the shells against their own side with the above results on the refugees the Americans were protecting. 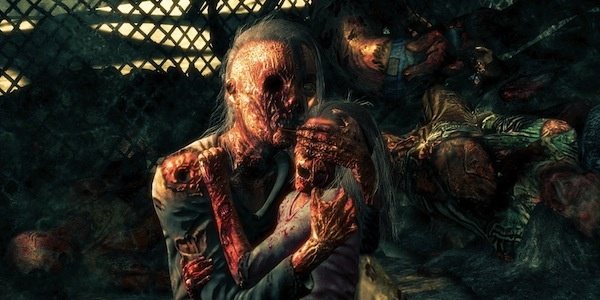 Yeeaah…that’s not how it works…

The scene itself is impossible for reasons which are outlined here and which I won’t go into: Talk:Spec Ops: The Line , but which I’ll use the author’s summary of here:

So the central plot event of the game is caused by the team firing rounds they don’t have to somewhere they couldn’t hit, detonating in a way they can’t and doing damage they couldn’t possibly do. Thus, um, showing the…true…horror…um…” 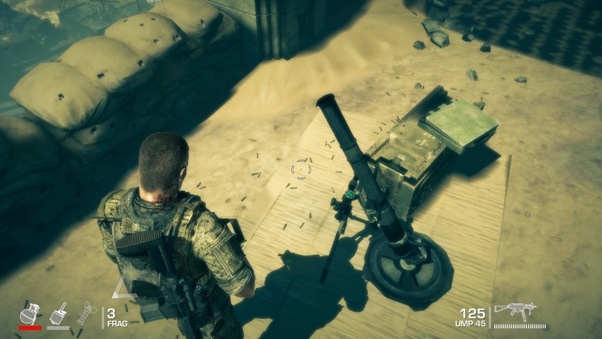 A distinct and startling lack of ammo makes this a not especially useful weapon.

You get the idea.

I’ll instead look at this from a “Why this game is poorly written and full of crap” perspective.

The devs have put you in a no win situation. It’s literally not possible to progress past this point in the game without using the mortar; the game doesn’t even give you the option not to. There’s actually a ladder on the platform leading to the ground the soldiers are entrenched on your character will ignore because he’s so dead set on using these mortars. The whole idea of using these shells is to show that, if you acted in real life “the way people act in video games” you’d do terrible things, like use white phosphorous shells against your own side.

Except, that’s not how most shooters work, since the game, as I mentioned, gives you options your character won’t actually take advantage of (unlike most shooters, which don’t give you choices at all). There’s a similar scene in Homefront where you accidentally call in a similar strike on your own side, accident being the key word. Here you do it on purpose, so the game can rub your nose in how bad you are because it wouldn’t let you progress past a certain point until you did this.

The devs’ response to people calling them out this kind of writing? “Your moral obligation is to stop playing the game then.” Oh…kay. Because you can’t write a plausible scenario where a player would realistically make a bad call, your solution is for people to just give up on the game they dropped $60 US on about midway through? Worse yet, this game came out in 2012, several years before Valve was forced to start giving people refunds for terrible games, so the devs are basically acknowledging they sold you a bad game, but don’t care because they have your money anyway.

Putting me in a position where, in the heat of the moment, I the player, make a bad call is one thing. If I do that, then you’re somewhat justified in calling me on it because it was a choice I made and I could’ve thought things through a bit (and a few times the game does actually do this, not that any of your choices actually matter). Railroading me into a bad situation and then making a bad decision for me and still acting like it was my decision after the fact just annoys me. It’s pretentious, and that’s not even getting into the truly surreal places the game’s campaign takes you near the end, because it needs to be moody and intellectual and slap you in the face as much as possible with its message, “War is bad.”

This isn’t a “brilliant deconstruction” of the genre. This is welding, awkwardly, enemies and weapons from Call of Duty, throwing in some obnoxious 70s rock music, giving us control of a bunch of idiots, adding some weird acid trip scenes toward the end, and calling the result “art.” This is not meant to appeal to you on an intellectual level, unless your appeal begins and ends at “military shooters glorify violence and are bad art” which leaves me wondering why exactly you’re playing the game in the first place.

Register for this site!

Enter your username or email to reset your password.